Netflix is a wonderful service. It’s opened up a world of movies and television to me that I never would have even looked at before.

What drew me in was this wonderfully rich world of fiction that mixed in some truth that aimed to dazzle and wow you at every turn. I don’t watch shows for characters, yes I get unreasonably invested in characters, but more than that I buy into the world they inhabit more. I imagine it, I envision it and I have to believe that truly such a world is possible. Mr. Selfridge builds a world I can believe in.

What I love about this show!

I am a period drama aficionado. If it’s set in another time, and gives insight into the way real people would have encountered historical milestones? I’m all over it. Mr. Selfridges does just that. It surprised me that things I take for granted now, like being able to buy clothes off the rack, or browse items before I shop were not actual common practice for a long time. Even things like having a beauty section in a shop, or having underwear on display was just not a done thing.

Watching as someone in the future, some things are painful to watch. The storylines that hurt the most to watch deal primarily with WWI. Through the story the show  dealt with the initial blind optimism of the men who enlisted, the media’s refusal to print the horrors of the front line, the way people profited from the war, PTSD as a result of the fighting and the role of women in the workplace due to the shortage of men. All these really intense and heavy issues were done so well, that it wasn’t till after the episode ended did you realise you had been taken to school and learnt a thing or two.

What’s great is that the characters evolve just as the times have. As society changes, so they become more flexible. The high collar, full black dresses of the shop assistants make way to more colourful and flexible clothing. It’s really nice to see the world, change and grow due to the events that happen.

I recommend this show to absolutely everyone! That being said..

Why I’m bored of this show.

I’m on Season 3 Episode 8 and I’m kind of over it. My favourite characters are no longer in the show, there’s less of an emphasis on historical issues and more on interpersonal drama. If I wanted to watch people making pouty faces and making bad decisions, I’d just keep watching Arrow.

I’ve found myself less and less invested in the different storylines, plus the time keeps jumping I’m never sure if the next scene is the next day or a week ahead which makes it really hard to keep up. I guess, I’ve just reached a point where I no longer really care what happens. Will Mr. Grove forgive? I don’t care, he’s been a terrible person all this time. Will Mr. Selfridge realise he’s being scammed? STOP WRITING CHEQUES TO YOUR GIRLFRIEND OMG. If you don’t do your due diligence on such a huge project then on your head be it my man. Will Lord Loxley stop being evil? Doubt it.

Bring back Lady May! Bring back the Leclairs! Goddamnit, raise Rose back up from the dead and give Violette a job or something to do, damn. Also, Victor is just really annoying at this point.

So I’ve decided to just stop watching for a while, until I get the itch to watch without willing a scene to go by. Thanks to Netflix I can jump back and forth with little thought, which is great, but also not great as I skip parts that become later relevant. Eh. I still love the show, but maybe watching three seasons in three weeks wasn’t the best way to avoid box-set-burnout! 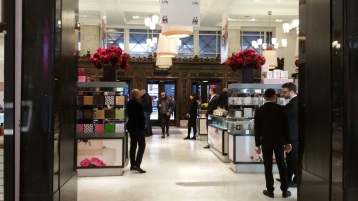 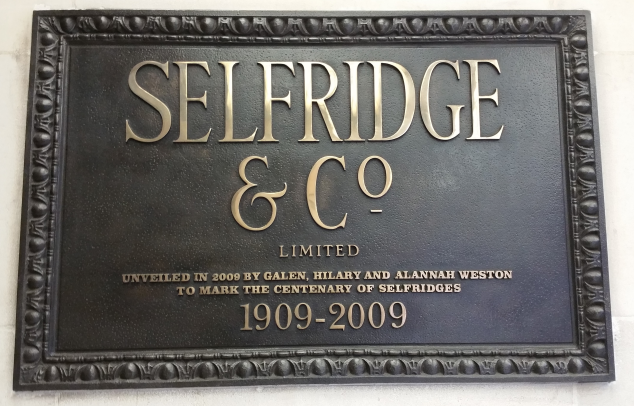 What was great though, was going to the actual store in London, walking through the double doors and getting that rush of excitement. Although actually shopping  in Selfridges is a nightmare and I hate it (sorry), just walking through and soaking up the history was lovely.